Congratulations! The NFIB North Carolina Political Action Committee (NC PAC) has endorsed your campaign for election to the North Carolina House. You have earned this endorsement by showing us that you understand the small business community. Additionally, the NC PAC feels that you possess the qualities that it takes to be a successful candidate. The NFIB North Carolina PAC is committed to electing legislators who support the free enterprise system and recognize the vital role of small business as the backbone of our state's economic and community life. On behalf of NFIB and our 6,500 member small businesses in North Carolina, I wish you success in the upcoming election and hope to be working with you in the coming session. 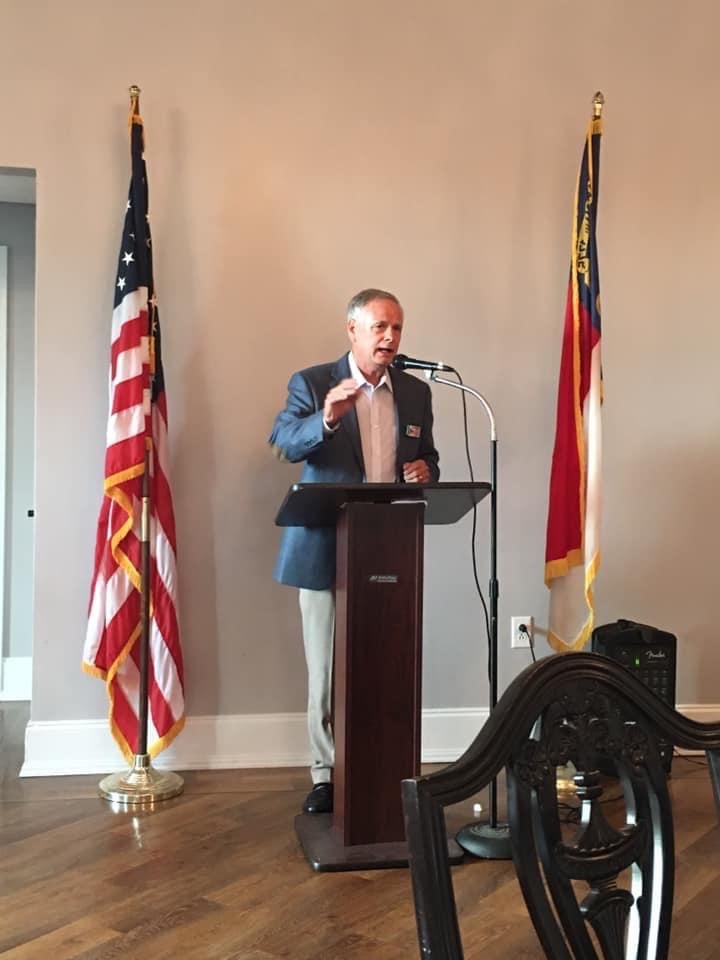 I was pleased when Steve said he would run for the seat so aptly filled by retiring Representative Michael Speciale. His experience as a County Commissioner and his business experience in New Bern make him uniquely qualified to serve Craven County in Raleigh. Carl Mischka Chairman NCGOP Congressional District 3 — Carl Mischka

Almost two years ago, I met Mr. Steve Tyson for the first time. I was looking for a place to move our business and my family. I was just about to close a deal in Wilmington, when I stopped in New Bern to take a "short" look. I was fortunate to have selected Mr. Tyson as my realtor to show me around. Steve convinced me to go with Craven County and fast forward... we completed a building, bought a home, and are grateful for meeting Steve who introduced us to this wonderful community. Steve's dedication to this County and the the community is unique. People as dedicated to their communities, as Steve is, should be in office. As an Independent, I believe Mr Tyson is the only candidate who can easily work across party lines to get the best for all citizens in District 3. We need Steve Tyson to represent our district. — Andreas Schneider

I have known Steve since grade school. He has always been kind, compassionate and passionate. He is that 1 in 10,000 that can do anything he sets his mind on. — Edwin Averette

For the last half-century I have lived on the south shore of the Neuse River below New Bern. I have known Steve Tyson for as long as I can remember. He is an honest man with a genuine concern for the people and our most important resource, the Neuse and Trent Rivers. As you may have noticed, the environment is high on his list of priorities. Steve is a "old Rough Rider." kind of Republican . I trust him. Rick Dove — Rick Dove

I have known Steve as a friend since 2009. I have watched him work for the people of Craven County as a Commissioner and as a volunteer in times of trouble. No One loves the people and the area more than Steve. With his experience, knowledge of the needs of the area and a willingness to listen to the people, he will make an excellent State Representative. — Rodger Whitney

Fair minded and always there to help. Aware of what is needed to keep our community safe and progress with the times, while keeping the integrity of it's history. Steve is considered an enigma in modern times; an honest politician. Something we are in dire need of. One man can do many things when given the right opportunity . Vote for Steve Tyson. — Maggie Bramwell

My experience in working with Steve has always been positive and genuine. He has a lot of knowledge and is a straight shooter. I think he would make a great leader in the house! — Joe McIver

I have seriously been wondering for a couple of years why you didn't run for Mayor. You really know the people of Craven County and it is obvious you love Craven County and its citizens. I am so happy you are running for the House for district 3 Steve. If anyone speaks for and already works hard for all of Craven County it has been you. You surely have my vote. I have been spreading the word. I really believe you have this.

I gladly endorse Steve Tyson for any political office he may choose. I've known Steve for 40 years and I feel he is genuine in his concern for always doing the right thing. — Chris Pridgen

No better man for the job! One of Craven Counties most valuable assets! Run, Steve, Run. — Ray Gottsleben

Steve Tyson is a man of action. I have known him for nearly 20 years. I have observed him in many roles as he has served our community: raising money to send Wounded Warriors Home for Christmas, serving as a Craven County Commissioner, serving on myriad Boards, sharing his extensive knowledge of our history from a native Eastern Carolinian's experience, and listening. Steve's continuing contribution to our community following Hurricane Florence has been impressive. He has mucked out houses, delivered water and food, moved furniture out of houses into pods and warehouses, explained how to get help, rebuilt houses, ensured the many relief agencies which came to help were well cared for, and Steve did all that because he cares for all of us. Steve Tyson has extensive experience in government, construction, caring, serving, managing money wisely, working with anyone, and getting things done. Steve has my support and my vote, as I know he will work hard to support all of us in NC District 3. — Tom Braaten

Steve has been a tremendous asset to New Bern and Craven County. He had also helped me personally and through my own business by always lending advice and support. I strongly support Steve Tyson! — Matthew Davidson

I have known Steve for many years. I have had a few in-depth conversations about people in general, politics, and a real estate negotiation or two on real estate. Steve is a good man as well as smart with business and what is happening around his home state of North Carolina. His brother Chuck is also a top-notch guy. Most important it is clear to everyone that knows him he cares about people at an advanced level than most. There is no position in the Raleigh State government he would not be qualified to hold. — Joey Bayer

Steve Tyson is FROM Craven County, and has Always been a strong supporter of all things pertaining to Craven County. When he was a County Commissioner, he was very active in promoting the County on the State level, has the knowledge to get things done for ALL of Craven County. Steve has the HEART and SOUL of Craven County's people. — Karla Liner

I have never known anyone more dedicated to our area of North Carolina as Steve Tyson. He is a problem solver, not a creator. Cool and calculated, he is able to see all sides of an issue, before offering solutions. I support Mr.Tyson completely in his endeavor to represent us in North Carolina. Marc Bergmueller — Marc Bergmueller

Steve Tyson knows and understands the people of Craven County. He does business here and helps people all the time. During Hurricane Florence recovery, he answered every call from any part of Craven and surrounding counties. He recruited people, secured donations, and when all else failed, just helped out on his own. There is just no one I would rather have representing us in Raleigh.  — Susan Braaten